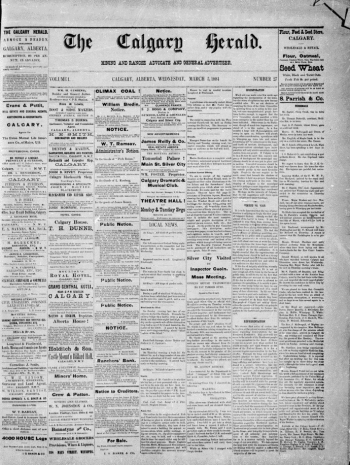 Public Hall
The settlers in the neighborhood of Fish and Pine Creeks have felt the inconvenience of having no place in which a public meeting or religious service could be held.

To obviate the difficulty, they have determined to erect a building for general accommodation where public meetings, religious services, etc, (by all denominations) etc., etc., may be held and it is thought that in time the same edifice may be utilized for school purposes. Messrs. Captain Boynton,Hobb, McInnes and Moss compose the committee of management and will doubtless complete the necessary arrangements without delay.

Church at Fish Creek
To the Editor of the Herald

Sir: – The settlers on Fish and Pine Creeks held a meeting a short time ago to discuss the important question of creating a suitable edifice in which people of all denominations could assemble by turns to hold Divine service. At first it was decided to place the building somewhat between the two creeks that it might be easy of access from both places; but since arrangement was made, one of the managers has seen fit to alter the site and thereby caused great disappointment to those who have already subscribed.

I have heard many complaints taken by this erratic manager, especially from the residence of Pine Creek, and I certainly consider that placing the Church at Fish Creek is very unfair to the residents of Pine Creek. These settlers are willing to subscribe to the extent of their means and ought, I consider, to be consulted before it is finally decided to [place the building on Fish Creek It is a grand idea, that of all sects co-operating to supply a general religious want. It shows a spirit free from all the petty bigotries which are so prevalent nowadays and which deter a person of one sect worshiping in a building used by another sect.

I hope the little difficulty concerning the site will soon disappear and heartily wish all interested in the matter success in their work.

(note: the place and date are obliterated on original page)

To the Editor of the Herald

Sir: – I have read the letter in your issue of the 9th inst., signed “Fair Play”. As chairman at two of the meetings, one at Pine Creek and the other at Fish Creek, I can only say that it was the wish of the settlers here that the building should be in one of the two creeks and not on the prairie but we were out-voted. As the pioneers in holding any regular service round here, we consider that Pine Creek really wants such a building and it was only from a wish to prevent any ill-feeling that we did not decide upon withdrawing our subscriptions and build a place at once on Fish Creek. So far as complaints of the action “erratic’ one of the managers concerned, the residents here are very much pleased that he has succeeded in quite the ——- ————–

The concert given in Boynton Hall, on Tuesday evening of last week in aid of the building fund of the Fish Creek Church was a decided success financially and musically. The Calgary brass band discoursed sweet music in a manner which did them infinite credit, considering the short time they have practised together. We have not space to particularize the merits of each performer. but we cannot forbear mentioning the Misses Winterbottom, who, in both their vocal and instrumental performances, carried off the palm. These ladies, who have recently arrived from England, are a decided acquisition to the amateur musical talent of Calgary.

Mrs. Allen, who is also a recent arrival, deserves special mention. Her fine contralto voice being displayed with good effect in the song “Where Sparrows Build”. Miss Roberts, an old favourite, maintained her previous reputation and sang that time honoured song “Kathleen Mavourneen” very sweetly with guitar accompaniment. But want of space forbids further notice. Suffice it to say that a very pleasant evening was spent, and the Fish Creek building fund has been materially increased.

Page 4
The profits on the concert held last week on behalf of the Fish Creek church amounted to $100. This is an excellent showing.

H.D. Johnson, contractor, has sent out carpenters to commence the construction of the Fish Creek church.

At the meeting of the members of the English Church on Tuesday night, it was resolved to continue the original plans by plastering the interior of the church and to raise the money partly by subscription and partly by a mortgage on the building for $500.

(note: We are presuming this refers to the little church, as the “English” church in Calgary was presumed to be all finished.)

Fish Creek Notes
The harvest here is well commenced all over the creek. The grain crops of all kinds are good and but little injured by the frost. The frost — cut down the tops of the potatoes but the roots are not hurt. Garden stuff and vegetables of all kinds have done well this year. It may be mentioned as showing the advantage of the upland flats as opposed to the river bottoms that Mr. D. Hamilton has on his farm. Half way between Calgary and the Creek about 20 acres of black and white oats well ripened and felled and quite untouched by frost which by calculation will get 50 bushels to the acre.

The new church of the Church of England is rapidly approaching completion. The building (follows)? the Gothic order of architecture with a high pitched roof. The main body of the church is –x– and the chancel 8×12. It is situated on land belonging to Mr. Glenn. The building has been put up by Mr. Johnson, builder and contractor in Calgary. Mr. F White’s flock of sheep numbering about ?00 head arrived —– —————.

The Rev. E. P. Smith opened the Fish Creek Church on Sunday. The church was filled, the congregation being almost entirely composed of settlers on Pine Creek and Fish Creek. At least five sixths of those present were old country people. The building only requires a little more shingling to be done and the east window to be put in to be complete. The entire cost of the church with the organ was $750. Mr Smith intends to devote his energies now to the erection of another church on High River, for which $500 has already been subscribed.

The efforts of the promoters of the concert in aid of the Fish Creek Church were well rewarded Thursday night. A full —– house assembled to enjoy an excellent programme. The Bishop of Saskatchewan was among the audience and all the youth and beauty of the “creeks” were present to do honor to the occasion. The programme is almost too long to admit of individual criticism. The old favorites ——led by Miss Roberts and her guitar and Mr. Sau—– with a local topical song quite held their own among the crowd of newly imported talent. Mr. Joseph’s coronet playing was a treat for which we were not prepared. This clever performer is a considerable addition to our local musical amateurs. The Misses Winterbottom bore the —— burden of the evening both in vocal and instrumental music. The glee club ————-entreated an imaginary shepherd to tell them ” tell them, tell them had he seen, had he seen their Flor— pass that way” and one more ——– the “Men of Har—–” to further

Boynton gave the “Three Jolly Post Boys” and “Drink, Pappy Drink” in his usual inimitable style. The wild whoop , which is such a feature in the captain’s rendering of the latter song, was caught up by the gallery, and went ringing over the prairie, echoed by the tuneful coyotes of the w— till it roused the wily Sarcee in his lair from —– ent dreams of cattle, fouly mired and slaughtered, with the gruesome though that Sam Livingstone and retribution had come at last. We don’t take a word of that back about the piano all the same captain. The proceedings closed with an impromptu dance. Altogether the concert was very successful and the proceeds, to judge from the size of the audience, ought to go a long way to put the finances of Fish Creek Church on a satisfactory basis.

The bell for the English Church arrived on Friday and the contractor H.D. Johnson means to get to work on the new belfry this week. The bell is the contribution of the N. W. M. Police in memory of their comrade, Corp, Lowry, who fell at Cut Knife Creek. Considerable work still remains to be done on the chancel. Five Gothic panels are to be placed behind the altar, with the ten commandments inscribed on them. The three lights of the east window are to be filled with stained glass, the lights being the gift of E. McCroskie, the architect of the church, Rev. E.P. Smith and Judge Travis.

As will be seen from our advertising column the Fish Creek Amateurs intend to give an entertainment in the Boynton Hall next Thursday. The programme, finally decided on consists of the farce Which is Which, followed by a short concert, in which several well known Calgary musical amateurs have consented to take part. The performance will conclude with a very amusing little piece entitled The Highwayman’s Holiday.

The performance given by the Fish Creek amateurs and others in the Boynton Hall on Tuesday night was well attended.

Owing to the indisposition of one of the performers the farce of Which is Which? had to be cut out of the bill but its place was admirably supplied by a musical entertainment in which Mr. Innis’ local song of the Bummer achieved an immense success.

The piece de resistance was the amusing little sketch entitled Highwayman’s Holiday, which was as complete a success all around as we have ever seen in any amateur performance. All the five characters were well filled and acted with spirit. The dashing appearance of the Misses Winterbottom in their highwayman’s disguise fairly took the house by storm. We congratulate the energetic managers on the excellent performance.