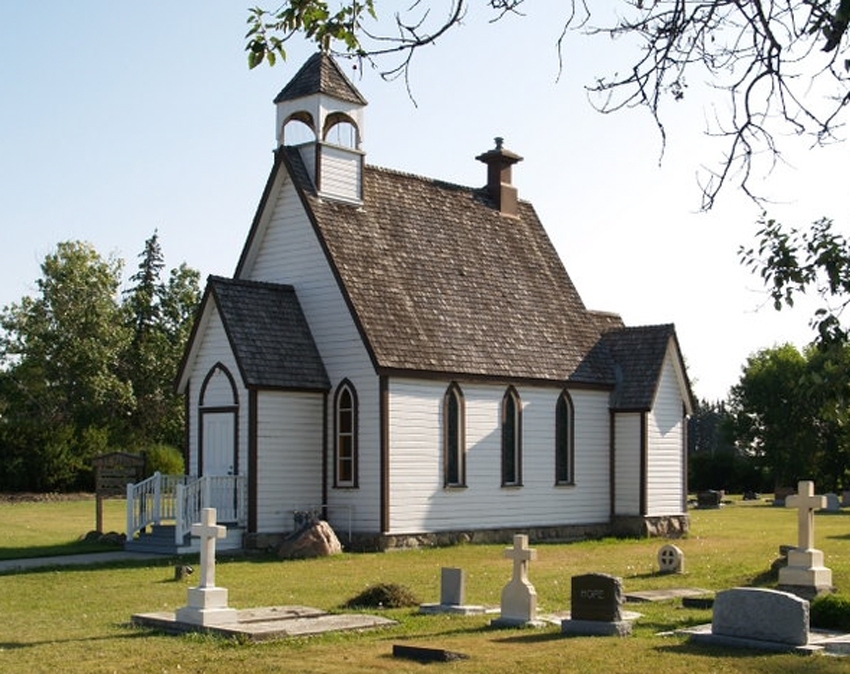 The heritage value of St. Paul’s Anglican Church lies in its association with the early establishment of educational and religious institutions in southern Alberta and in its early representation of Carpenter Gothic architecture.

The arrival of the Canadian Pacific Railway at Fort Calgary in 1883 established the fledgling community as a hub for settlement and development in southern Alberta. The trail south from Calgary to Fort Macleod became a significant transportation route and several stopping houses and small communities emerged along the path, including Fish Creek. In 1885, John Glenn, one of the pioneer farmers in the area, donated one acre of land for the construction of St. Paul’s Anglican Church.

The church was one of several constructed in the mid-1880s by the Anglicans to serve both Native and white populations in southern Alberta. Reverend E. Paske Smith, the Calgary’s first resident Anglican clergyman, presided at the inaugural service in the church, held in September 1885. In addition to hosting religious services, St. Paul’s Anglican Church also served as an early school. Mrs. Helen Millar (Shaw) taught community children in the church building from 1887 until 1891. St. Paul’s Anglican Church is one of the first Anglican churches and one of the earliest school buildings still extant in Alberta.

Like many early churches in Alberta, St. Paul’s was constructed in the Carpenter Gothic style. This form of frontier architecture rendered the traditional forms of stone and brick Gothic Revival architecture in wood. It was a popular style in early western Canada because of its use of readily available materials and its relative simplicity. This style is manifest in the building’s wood construction, pointed arch windows, separate entry porch and attached sanctuary.

Though generally representative of Carpenter Gothic architecture, the church’s cruciform plan and steeply pitched roof distinguish it from most other provincial examples of this style.

Several unique elements of the church enrich the building’s heritage value. The church bell was donated to the parish by the congregation of the Church of St. Andrew the Apostle in Thelveton, Norfolk, England. The bell is believed to have been cast roughly two centuries before its removal to St. Paul’s, making it one of the oldest church bells in the province.

The interior of the church is graced by an elegant oak communion table, reredos, and lectern. These fine pieces were created by students at St. Dunstan’s Indian Industrial School and exhibit a high degree of craftsmanship.

Situated close to the historic St. Patrick’s Roman Catholic Church and Lacombe Home, a facility constructed to serve orphans, the aged, and the poor, St. Paul’s Anglican Church is an integral part of a complex of early religious buildings that speak powerfully of the place of faith in the development of the area.

The church has remained essentially unaltered since the turn of the 20th century with the notable exception that the original steeple of the church was removed by a group of parishioners in the 1940’s due to rotting wood and danger of its collapse. The replacement steeple, however, was not built according to the original design.

In addition, in 1987 the Church was lifted off its foundations in order to replace the dirt basement with a concrete one, providing a more stable foundation for the preservation of the building. In November, 2010 it was designated as an Alberta Provincial Historic Resource. It has now been approved by Alberta Culture to restore the original architectural integrity of the Church through the replacement of the steeple with one keeping to the design of the original.